Language Status: Since 1960 Bambara has become one of the official languages of Mali. 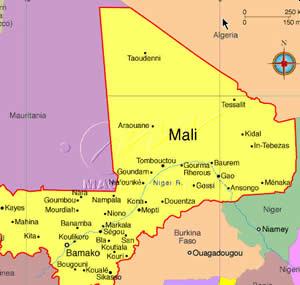 Bambara, also known as Bamana or Bamanankan is a lingua franca and one of the several national languages of Mali. It is spoken by perhaps 15 million people, by 5 million as native language and by about 10 million as second-language. It is estimated that about 80 percent of the population of Mali speaks Bambara as its first or second language. It has a subject–object–verb clause structure and two lexical tones. The native name bamanankan means: the language (kan) of heathens (bámànán), “people who refuse Islam”, as opposed to speakers of a closely related language, Djula, who are Muslim.

Bambara is traditionally used by  the  Jeliw, Griots, wandering poets  from Western Africa. Therefore is has a very rich oral tradition. Its writing got spread only after the French Colonization of Mali and it is mainly based on the Latin alphabet (to which the vowels ɛ and ɔ are added) or on the N’KO alphabet. Bambara is a lingua franca and having been the language of the Malian Empire, its importance and its spread was determined by the conquests of this Empire and pre-colonial International merchant networks and by the following French Colonization.

Bambara is the mother tongue of the Bambara people but also the second Language of a large number of ethnic groups in Mali. It is spoken in Burkina Faso, Ivory Coast, Guinea and Mauritania , so it’s one of the most important languages of West Africa.

The Official Status of Bambara

Bambara is not the Malian official Language, which still remains French, but as a matter of fact about 80 per cent of the Malian population speaks Bambara as its first or second Language.

Bambara presents a simplified variety, the so-called “Djula”, which covers a geographical and social extension even wider in the same countries where the Bambara Language is spread: Mali, Senegal, Burkina Faso, Ivory Coast and Guinea. The most important dialect is Bamara, influenced by Maninkakan. Bambara has many local dialects: Kaarta, Tambacounda (West), Beledugu, Bananba, Mesekele(North), Jitumu,Jamaladugu, Segu (in the Centre), Cakadugu, Keleyadugu, Jakaladougu, Kurulamini, Saro;Dialects on the North-East of Mopti; Zegedugu, Bendugu, Bakokan, Jonka (South -East).

Bambara, handed down through nomadic poets of West Africa called “Jeliw”, is mainly an oral Language. The language got written for the first time just after the French colonization between 1864 and 1895 in the Latin alphabet (to which the vowels ɛ – ɔ are added), or in the N’KO alphabet, and its first official spelling was introduced in 1967. The written literary production is very small and the language is rich in French loanwords. Nowadays Bambara is often used by the Malian musicians and it also appears in some songs by Steve Wonder. In the rural areas, literacy is limited because of delay in using writing so, even if the written literature is slowly developing, oral literature is still alive and it is rich in stories of kings and heroes narrated by the ”Jeliw”, the real  keepers of the Bambara collective memory, true “books of human history” who have learnt singing and acting right as their ancestors did for ages. Many songs are very old, and in some cases, they date back to the old Malian Empire.

Since 1967 Bambara was written in the Latin Alphabet using some additional phonetic characters i.e. the vowels (ɛ – ɔ) or the N‘KO alphabet. Bambara has seven vowels: a, e, ɛ i, o, ɔ, u, each of which can be nasalized or pharyngealized, reaching, in total, 21 phones. Accents can be used to indicate tones. The N’KO alphabet is an alphabet created by the Guinean writer Solomana Kante in 1942 in response to those who stated that African people were “people without a Culture “because until then, there was no  indigenous African writing system for their language”. The N’KO alphabet was used for the first time in the city of Kankan, in Guinea, for the Maninka language. Then it spread to other languages belonging to Mandé group. Both the N’KO and the Arabic alphabet are still used by the Bambara people even if the Latin alphabet is much more common.

The ordinal numbers , in Bambara, are formed by adding the suffix – na (n) to the regular cardinal numbers. The only exception to this is “first” which is “fɔlɔ”

As the majority of Mande languages, Bambara is a tonal Language, without nominal classes and it has got a typical SOV (subject, object, verb) clause structure and two lexical tones. It is strictly related to the Djula language, but it is quite similar to the other Mandingo languages as Mandinka and Malinke. A characteristic of this Language, that we can find in the urban areas, is the presence above all of many loanwords from similar languages and from French. Thanks to this characteristic Bambara is an easy to learn language and, for this reason, it is spread as lingua franca in many areas of Western Africa.

Bambara has no nominal classes. Nouns are not inflected for gender. In the noun, the gender can be indicated with the adding of an adjective –“ce or ke” for the masculine word and “muso” for the feminine word. Plural is formed linking a vowel suffix -u more frequently with a low tone (in spelling -w ) for nouns or adjectives. Bambara uses postpositions to nouns and in order to indicate direction, position and, sometimes, possession.

Verbs are the most important and complex element of the Bambara grammar. They have no subject – verb agreement; they have no person markers and transitive and intransitive verbs are conjugated according to different rules.