Language Status: Wolof is one of the country’s national languages in Senegal (along with, Jóola-Fonyi, Mandinka, Pulaar, Serer-Sine and Soninke). Wolof is also the language of the third largest ethnic group in The Gambia.

Dialects: There are two major geographical varieties of Wolof mutually intelligible with some differences: one spoken in Senegal, and the other spoken in The Gambia. Within Senegal there are five dialects: Baol, Kajoor, Jolof, Lebu and Jandeer. In addition, there are differences between the Wolof spoken in urban areas as compared to that spoken in rural regions.

Typology: The basic word order of Wolof is SVO (Subject-Verb-Object). If the direct object constitutes the topic of a sentence, it precedes all other sentence constituents. 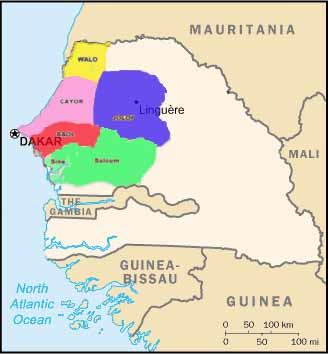 The Wolof Empire was a state on the coast of West Africa, located between the Senegal and Gambia rivers, which thrived from the mid-14th to mid-16th century CE. The empire prospered on trade thanks to the two rivers providing access to the resources of the African interior and coastal traffic commerce that was often carried out with European merchants, notably the Portuguese and then the French. Following the break-up of the Wolof Empire in the 16th century CE, a smaller state persisted, the Wolof Kingdom, into the 19th century CE.

Wolof is spoken by more than 10 million people; about 40 percent (approximately 5 million people) of Senegal’s population speaks Wolof as first language. Increased mobility, and especially the growth of the capital Dakar, created the need for a common language; furthermore, the raising of popularity of the Muridiyya brotherhood in the ‘80s, which used Wolof since the beginning as language for propaganda, gave a definitive contribution to the diffusion of this language. Today, an additional 40 percent of the population speaks Wolof as a second or acquired language. In the whole region from Dakar to Saint-Louis, and also west and southwest of Kaolack, Wolof is spoken by the vast majority of the people. Typically when various ethnic groups in Senegal come together in cities and towns, they speak Wolof. It is therefore spoken in almost every regional and departmental capital in Senegal.

In Mauritania, about seven percent of the population (approximately 185,000 people) speaks Wolof. Most live near or along the Senegal River that Mauritania shares with Senegal.

Before the colonization of Senegal, efforts were made to write the language using the Arabic script called Wolofal. A big part of the literature has been written in Wolofal. Some segments of the population, particularly older people in Senegal, still use the Arabic script today.

The Latin script started being used in the 15th century to record literary works and the oral traditions of the Wolof people. Wolof orthography uses the Latin alphabet which was standardized between 1971 and 1985. The Wolof alphabet counts 28 basic graphemes (vowels with acute stress and umlaut are generally considered as separate letters):

Wolof has 9 vowel phonemes. Vowels can be long or short and the length makes a difference in word meaning. Length is represented by double vowel letters in writing. Orthographic representation of the vowels is given in parentheses.

Unlike many other Niger-Congo languages, Wolof does not have tones. Stress by itself does not differentiate word meaning. Nevertheless, Wolof syllables differ in intensity.

The Wolof numeral system is based on the numbers “5” and “10”. It is extremely regular in formation, comparable to Chinese.

The numeral “one” takes as initial consonant that of the class of the name to which it refers: tree: garab g- → one tree: genn garab; horse: fas w- → one horse: wenn fas.

The others are invariable, including those where “one” appears as a component. For example: “six” is juróom-benn, literally “five (juróom) and one (benn)” and remains so for each class of names.

If the numbers (except one) precede a noun they take a final -i:

In the numbers where the conjunction “ak” appears, the -i and the noun follow the first part of the numeral:

Wolof is characterized by consonant mutation. It has a considerably simplified system of nominal classes. The verb is very simple and is conjugated employing a number of lexical words, (generally called “temporal pronouns”), which can precede or follow the verb stem. The position of the other elements of the verbal syntagma (object pronouns, aspect markers, etc.) is related to that of the temporal pronoun.

Wolof has many suffixes (mostly derivational) and prefixes. Noun count eight singular classes (each one represented by a consonant that is employed to form all the class-related morphemes: b, g, j, k, l, m, w, s) and two plural ones (y and ñ classes). Nouns do not usually undergo morphological change in plural form, but shift their agreement to a plural class. The construction of the genitive is direct (AB) but reinforced by determinants. The numbering system is quinary.

The singular and plural of nouns in a sentence is identified with the articles, the demonstrative and indefinite pronouns or the question words referring to them. each of these particles has a specific position either before or after the noun. Hence, the noun is invariable but the article instead is polymorphic.

There is no specific grammatical category for adjectives: at their place verbs are used, that describe qualities or states. For example, the so-called adjective baax “good” is actually a verb which means “to be good”.

Adjectives in attributive positions, therefore, are translated employing these verbs in relative clauses: téere bu baax, “a good book”, is literally “a book that is good” (in this expression bu is the relative pronoun of class b-).

Verbs are unchangeable stems that cannot be conjugated. To express different tenses or aspects of an action, personal pronouns are conjugated at their place. In Wolof, tenses like present tense, past tense, and future tense are just of secondary importance. Of crucial importance is the aspect of an action from the speaker’s point of view. The most important distinction is whether an action is finished, or still going on, from the speaker’s point of view, regardless whether the action itself takes place in the past, present, or future. Other aspects indicate whether an action takes place regularly, whether an action will take place for sure, and whether an action wants to emphasize the role of the subject, predicate, or object of the sentence.

In Wolof there are five auxiliary verbs which are essential for communicating and each has a specific use.

The simple negation of the verb to be is formed by adding the suffix -u(l) to the verbal root or to the flexional elements, depending on the tense.

Adverbs are generally formed by using an adjectival verb together with a relative pronoun fixed in class b- or l-: for example, bu bare could mean either “good” (referred to a noun of class b) or “well”.

Simple prepositions are really few. Ci/ca “in, at; to” is the most used one, indicating location in any sense; the variant ci is used for objects close to the speaker, while ca refers to far elements.

Among the particles that are exclusively conjunctions one can mention waaye “but”, au, am “or” and te “and, then”; differently from ak, te connects with each other verbs (including those with the meaning of adjectives) and clauses, but not nouns.

See, for example, the sentence Omar ak Sàmba dañu xiif te mar “Omar and Sàmba are hungry and thirsty”, where ak connects the two proper nouns Omar and Sàmba, while te links together the two verbs xiif “to be hungry” and mar “to be thirsty”.