– Central dialect (is in an intermediate position between the above two, stretching from Pskov

to Tver, Moscow, Nizhny Novgorod, and down to the Lower Volga region.) 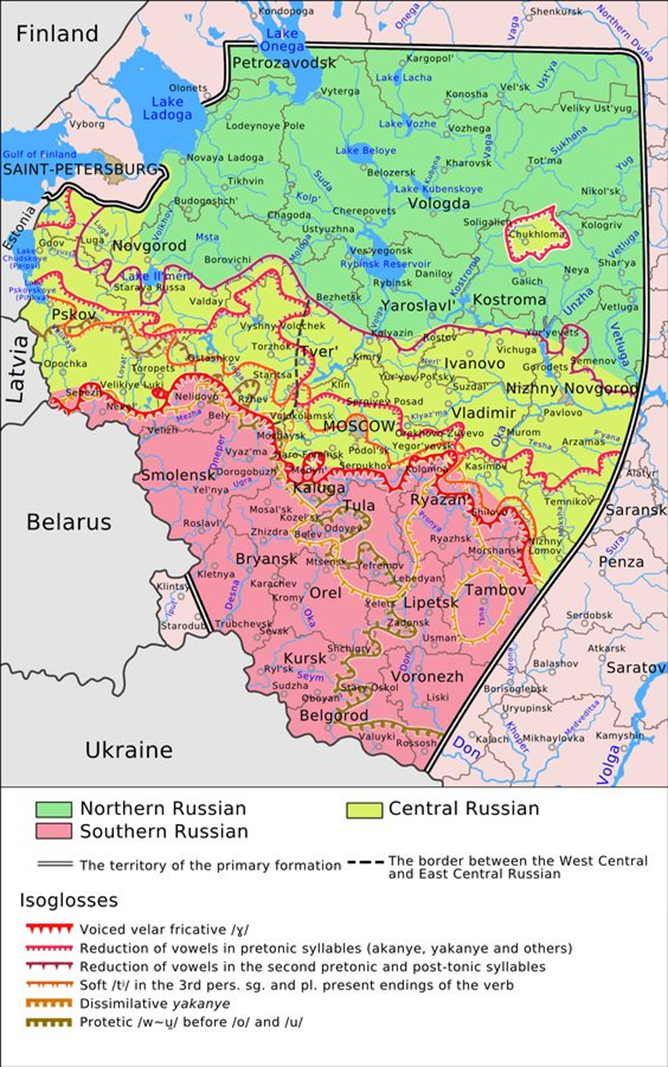 Russian is a member of Indo-European family of languages as are English, French, Spanish, Persian and Hindi. The Russian language emerged from the common East Slavic tongue (which also includes Ukrainian and Belarussian), Ancient Russian or Old Church Slavonic, by the A.D. 14th century in the Rostov-Suzdak area of central Russia. Old Church Slavonic (also known as Old Church Slavic) was the first Slavic literary language, which influenced the development of the modern Slavic languages, including literary Russian.

Chronicles from Prince Vladimir’s 10th century kingdom in Kiev used a mixture of Russian and Old Slavonic. In the 14th century when Moscow became the cultural and administrative center of proto-Russia, local Russian took precedence over Old Slavonic and other Slavic languages. By the 18th century the Moscow dialect became the dominate dialect in the Russian kingdom.

The official status of Russian language

The modern literary language is usually considered to date from the time of Alexander Pushkin in the first third of the 19th century. Pushkin revolutionized Russian Literature by rejecting archaic grammar and vocabulary in favor of grammar and vocabulary found in the spoken language of the time. By 1938, the Russian language was a compulsory subject in the primary and secondary schools of all regions. In schools where an indigenous language was used alongside Russian, courses in science and mathematics were taught in Russian. Many university courses were available only in Russian, and Russian was the language of public administration in all jurisdictions in all fifteen Soviet republics. In the mid-1990s, in every area of the federation, Russian remains the sole language of public administration, of the armed forces, and of the scientific and technical communities. Russian schools grant diplomas in only two minority languages, Bashkir and Tatar, and higher education is conducted almost entirely in Russian.

Russian is a rather homogeneous language, in terms of dialectal variation, due to the early political centralization under Moscow’s rule, compulsory education, mass migration from rural to urban areas in the 20th century, as well as other factors.

Despite dialect levelling after 1900, especially in matters of vocabulary and phonetics, a number of dialects still exist in Russia. Some linguists divide the dialects of Russian into three groupings, Northern dialect, Central (or Middle) dialect, and Southern dialect, with Moscow lying in the Central region. The Central Russian dialects are transitional dialects between North and South.

Dialects of Northern Russian have a phenomenon called okanye (оканье), in which unstressed /o/ is pronounced clearly. This contrasts with Standard Russian, which has a phenomenon called akanye (аканье), in which unstressed /o/ and /a/ merge. Therefore, a Northern Russian speaker would pronounce много “many” as [ˈmnogo] instead of [ˈmnogə].

Dialects of Southern Russian have a phenomenon called yakanye (яканье), in which unstressed /o/, /e/, /a/ are pronounced as [æ] when preceding a stressed syllable. This is unlike Standard Russian, which pronounces these vowels as [ɪ] in this position. So, несли is pronounced as [nʲæsˈlʲi] instead of [nʲɪsˈlʲi].

The Central dialects are basically transitional dialects between North and South. Some dialects have okanye (i.e. Tver) , while others have akanye (i.e. Moscow).

In Russia, Cyrillic was first written in the early Middle Ages. Later a succession of cursive forms developed. In the early eighteenth century, under Peter the Great, the forms of letters were simplified and regularized, with some appropriate only to Greek being removed. Further unnecessary letters were expunged in 1918, leaving the alphabet as it is today.

Russian spelling uses fewer diacritics than those used for most European languages. The only diacritic, in the proper sense, is the acute accent, which marks stress on a vowel, as it is done in Spanish and Greek. Although Russian word stress is often unpredictable and can fall on different syllables in different forms of the same word, the diacritic is used only in dictionaries, children’s books, resources for foreign-language learners, the defining entry (in bold) in articles on Russian Wikipedia, or on minimal pairs distinguished only by stress (for instance, за́мок ‘castle’ vs. замо́к ‘lock’).

There are 36 consonant sounds in Russian. All consonant sounds are divided into hard and soft. Most sounds come in pairs “hard vs. soft”, i.e. their pronunciation differs only by softness. If consonant letters are followed by vowel letters, the soft/hard quality of the consonant depends on whether the vowel is meant to follow “hard” consonants ⟨а, о, э, у, ы⟩ or “soft” consonants ⟨я, ё, е, ю, и⟩;

Russian is widely considered an SVO language (Subject – Object – Verb).  But Russian belongs to the kind of languages without strict word order – you can change the position of the words in sentence – and nearly all positions would be correct. By changing this order you change emphasis as well – as a rule, the first word is the most important.

Russian grammar employs an Indo-European inflexional structure, with considerable adaptation. Russian has a highly inflexional morphology, particularly in nominals (nouns, pronouns, adjectives and numerals). Russian literary syntax is a combination of a Church Slavonic heritage, a variety of loaned and adopted constructs, and a standardized vernacular foundation.

Russian is subject to the T-V distinction (serves to convey formality or familiarity). The respectful form of the singular you is the same as the plural form. It begins with a capital letter: Вы, Вас, Вам, etc., in the following situations: personal letters and official papers (addressee is definite), and questionnaires (addressee is indefinite); otherwise it begins with minuscule.

A Russian adjective is usually placed before the noun it qualifies, and it agrees with the noun in case, gender, and number. With the exception of a few invariant forms borrowed from other languages

Russian has several classes of numerals: cardinal, ordinal, collective, and also fractional constructions; also it has other types of words, relative to numbers: collective adverbial forms, multiplicative and counting-system adjectives.

Russian verbs have six forms in the present tense: 1st person, 2nd person, and 3rd person, all of which can be singular or plural. The verb ending tells us the point of view (1st, 2nd, or 3rd) and the number (singular/plural) of the verb.