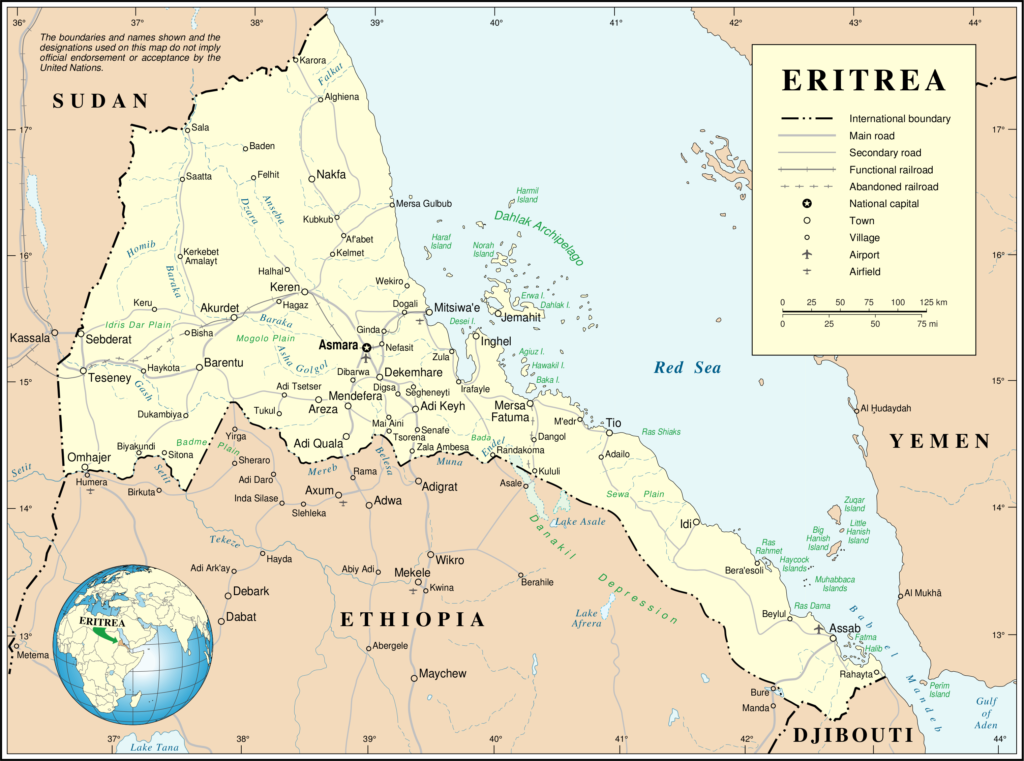 Eritrea has a variety of climatic conditions. Asmara at 2,350 meters has a pleasant climate all year (average temperature of 16° C and receives 508 mm of rainfall annually). The eastern coastal areas receive the unpredictable, “little rains” (belg) during October to March, while the other areas get “main rains” (kiremti) from June to September. In the highlands, further inland, with an elevation between 1,800 and 2,100 meters the hottest month is usually May (around 30°C) and in winter (December to February) temperatures are near freezing point at night. At sea level along the coast (Massawa, Assab), the period from June to September is very hot (40-50°). In the period December to February (rainy season) the temperature varies from 20°C to 35°C. Massawa at sea level has an average annual temperature of 30° Celsius and an annual precipitation of 205 mm. In the western lowlands (Agordat, Barentu), the temperatures and the rainy seasons are comparable to those on the coast.

Currency: The nakfa (ISO 4217 code: ERN) is the currency of Eritrea and was introduced on 8 November 1997 to replace the Ethiopian birr at par. The nakfa is divided into 100 cents.

Eritrea’s HDI value for 2018 is 0.434— which put the country in the low human development category— positioning it at 182 out of 189 countries and territories.

History: Eritrea was part of the first Ethiopian kingdom of Aksum until its decline in the 8th century. It came under the control of the Ottoman Empire in the 16th century, and later of the Egyptians. The Italians captured the coastal areas in 1885, and the Treaty of Uccialli (May 2, 1889) gave Italy sovereignty over part of Eritrea. The Italians named their colony after the Roman name for the Red Sea, Mare Erythraeum, and ruled there until World War II. The British captured Eritrea in 1941 and later administered it as a UN Trust Territory until it became federated with Ethiopia on Sept. 15, 1952. Eritrea was made an Ethiopian province on Nov. 14, 1962. A civil war broke out against the Ethiopian government, led by rebel groups who opposed the union and wanted independence for Eritrea. Fighting continued over the next 32 years.

Geography: Eritrea was formerly the northernmost province of Ethiopia and is about the size of Indiana. Much of the country is mountainous. Its narrow Red Sea coastal plain is one of the hottest and driest places in Africa. The cooler central highlands have fertile valleys that support agriculture. Eritrea is bordered by the Sudan on the north and west, the Red Sea on the north and east, and Ethiopia and Djibouti on the south.

Structure: President and his cabinet of 16 ministers, regional governors and other officials form the 24-member State Council, the executive branch of the Eritrean government. A unicameral 150-member National Assembly comprising 75 Central Committee members of the ruling PFDJ, together with 75 others form the legislative branch of the democratic government of Eritrea. The National Assembly establishes the domestic and foreign policies of the government, regulates the State Council’s execution of these policies and approves the country’s budget. The National Assembly elects the president directly. The judiciary consists of courts at national (Supreme Court), regional (10 provincial courts), and village levels (29 district courts). Special Sharia courts subjugate to the Muslim population, following Islamic Sharia law in family cases.

The economic outlook is positive, with real GDP growth projected to increase to 3.9% in 2020 and 4.0% in 2021. Per capita income is expected to grow from 1.8% in 2019 to 2.6% in 2021. Underpinning this outlook are the removal of UN sanctions, the dividends from continuing the September 2019 peace and friendship agreement with Ethiopia, and the cessation of hostilities with Djibouti. This has paved the way for the re-engagement of various international organizations that will support various sectors of the economy. There is confidence in the country’s macroeconomic outlook, particularly the possibility for embarking on financial reforms. The main opportunities are in mining, tourism, and agriculture. Increased investment in copper, zinc, and Colluli potash is expected to drive growth in mining. The Africa Finance Corporation and the Africa Exim Bank will jointly finance potash production. And investors from Italy and the Eritrean diaspora have expressed interest in developing the islands and coastlines, which would boost tourism. Agriculture is attracting development partner investments in irrigation, microcredit, and alternative livelihoods. The Horn of Africa initiative is focusing on infrastructure and human development as drivers of growth.

The culture of Eritrea is the collective cultural heritage of the various populations native to Eritrea. Eritrea has nine recognized ethnic groups. Each group have their own unique traditions and customs but some traditions are shared and appreciated amongst different ethnic groups.

Because of the protracted war of liberation, the development of arts and humanities has been hindered. Some new artists in postliberation Eritrea are emerging, however, with an artistic focus on the country’s struggle for independence. Since the Eritrean society is extremely poor, the government needs to prioritize its funds for development efforts, leaving little for the arts. However, some support is given to cultural shows and exhibits that portray the cultural variety of the Eritrean people. Support is also given to exhibits and shows that display the hardships and sacrifices of the thirty-year war of liberation.

This literature, shared between Eritrea and Ethiopia, consisted mainly of historical tales about royalty and noblemen; ecclesiastical works, often in translation; and religious poetry. The first work published in Tigrinya was a translation of the Gospels, written in the 1830s and published in 1866.

Eritrea is the only African country to have no privately-owned media.

There is no room for freely reported news and the media are subject to the whim of the president. The government has held a monopoly over broadcasting since independence.

Radio: Voice of the Broad Masses of Eritrea, Zara FM

Holidays and Festivals (Calendar in 2020)

20.06. Martyr’s Day (Maelti Siwuat’ a remembrance day for those   who fell in the struggle for independence)

31.07. Eid al-Adha (Islamic festival to commemorate the willingness   of Ibrahim to follow Allah’s command to sacrifice his son.

29.09. The Prophet’s Birthday celebrate by Muslim

There are nine movie houses in Asmara. The cinemas have regular English, Italian and Indian films, which are dubbed or have subtitles. The older and larger movie houses were built during the Italian period and are of architectural interest.

Eritrea has no tradition in drama. It is only today that theatre is growing more popular in Eritrea as a channel of artistic expression. Original Eritrean theatre often takes the struggle against Ethiopian domination as a major theme and usually displays a political sensitivity.

Eritrean cuisine carries Arabic, Italian, Ethiopian and British influences. Grains and vegetables feature in most foods, while spices like cardamom, nigella and berbere used liberally. Unleavened breads, similar to pancakes, are eaten with most meals. Torn into pieces, the bread is used to scoop up vegetables and meat in a spoon-like fashion. Meals are generally eaten at a lowset table and served on a large share plate. A popular Eritrean dish is kulwha, which is made with lamb, vegetables and spices, and could be considered a stir-fry of sorts.

Eritrea’s National Education Sector Plan 2018-2022 is the country’s second sector plan and the first one underpinned by an education sector analysis. The strategic priority is to improve quality of learning in primary and secondary education by expanding early childhood education, improving teacher qualifications, and by bringing more out-of-school children into schools. The plan further identifies girls’ education and special needs education as cross cutting areas for action.

According to the Decentralization Act 1996, the six Zoba Education Offices are responsible for overall administration and management of the education sector in their respective region. The school management office/unit, together with the Parent Teacher Student Associations (PTSAs), are responsible for the overall school management and school development programs. The education sector in Eritrea faces some challenges including disparities in access to education among rural and urban regions, the scarcity of reliable data on education, education finance. Factors such as disabilities, poverty and socio-cultural norms hinder participation of many children in schools. The sector benefits from limited overseas development assistance (ODA).

Education in Eritrea is officially compulsory between 7 and 16 years of age. There are five levels of education in Eritrea, pre-primary, primary, middle, secondary and tertiary. There are nearly 238,000 students in the primary, middle, and secondary levels of education. There are approximately 824 schools in Eritrea and two universities, University of Asmara (UoA) and the Eritrea Institute of Technology (EIT), as well as several smaller colleges and technical schools.