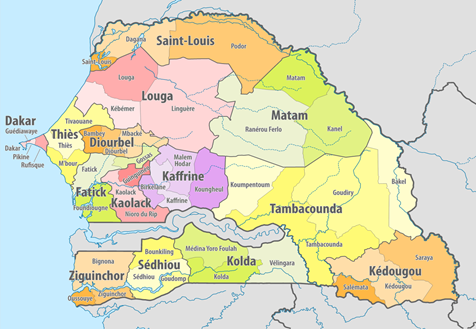 The climate is tropical, semi-arid in nature. There is a long dry season, from October to June, in the northern part of the country and a rainy season, which is linked to the African monsoon, from November till May, in the southern part. The north of Senegal has a Sahel climate, causing rainfalls to be less abundant.

Wolof is the most widely spoken language. French is used by the administration but understood only by 15-20 % of the population.

During the 8th century, Senegal was part of the Ghana Empire.

In the 13th and 14th centuries, a part of Senegal, the area between the Senegal River and the territory where today’s capital is, was part of the Jolof Empire. In the 16th century, many European countries were interested in controlling the market area where slaves, bound for the Americas, could be collected. Firstly, the Portuguese traders and then the British, French and Dutch jostled for control over most of the strategic points. Since 1659, Senegal’s predominantly French influence helped construct one of its cities, Saint-Louis, and subsequently turned Dakar into the country’s administrative centre in the 19th century.

The 20th of June, 1960, Senegal was declared independent from France and part of the Mali Federation. Two months later, Senegal withdrew from the federation and became an independent republic, under the presidency of Léopold Sédar Seghor, a socialist and a poet of international stature. At the end of 1980, Seghor voluntarily stepped down and was replaced by Abdou Diouf, who was faced with the mounting crises.

Geography: To the north, Senegal borders Mauritania, along the Senegal river; to the east, Mali; to the south, Guinea and Guinea-Bissau, where the natural border is the Casamance River; and the North Atlantic Ocean to the west. The Cape Verde (Cap Vert) Peninsula is the westernmost point of the African continent. The Gambia penetrates more than 320 km into Senegal, from the Atlantic Coast to the center of Senegal, along the Gambia River, which separates Senegal’s territory into two parts.

The parliament of Senegal, The National Assembly, is a unicameral entity, with most members being directly elected and in charge for a five-year term. Senegal is a multiparty presidential republic. The three powers- judicial, legislative and executive –  are separated. The president is the head of the State and of the Government. He is directly elected by adult suffrage and could stay in charge for a seven-year term, with a two-term limit. The President appoints the Ministers directly.

The Senegalese economy is mostly based on agriculture, with the most important crops being peanuts, sugarcane and cotton (export earnings), fishing (12.3% of export earnings), telecom services and tourism. The Senegalese economy is the second economy of the West African Economic and Monetary Union (UEMOA) and fourth of the Economic Community of West African States (ECOWAS).
After his election in March 2012, President Macky Sall has been trying to implement reforms in hopes of leading Senegal towards an economic emergence by 2035. The Senegal Emergent Plan (PSE) details a three step model aimed at developing the country.

Senegal’s economic growth has been among the highest in Africa, between 2014 and 2018, remaining above 6% annually. However, this growth has consistently been contrasted by the strong demographic growth and the derived food shortages.

This year, the COVID-19 pandemic has significantly changed Senegal’s economic development. Growth has significantly slowed to an estimated 1.3% percent, with tourism, transport and the exports market being exceptionally hard hit.

The main body of works in Senegalese literature is written in French. There are also some books written in Arabic or in native languages like Wolof, Pulaar, Mandinka, Diola, Soninke and Serer. Originally, literature was transmitted in the form of oral tradition, as native languages lacked written codification. Literature, therefore, took the form of Griot chants: Griot was the community storyteller who could concurrently be a singer, poet and musician. Being the repository of the oral tradition, he frequently was also an important guide and advisor for the royals.

Post-colonial Senegalese writers are often engaged in the defense of the “national literature” and eager to show the pride they take in their roots. This contemporary form of literature investigates the relation between language and identity, while trying to find the intimate sense of pride in African culture. The most important Senegalese novelists of this period are Cheikh Hamidou Kane, Boubacar Boris Diop and Ousmane Sembene.

The most important Senegalese poet, who has earned international acclaim, is the president and philosopher Léopold Sédar Senghor. Other important poets include Birago Diop, Cheik Aliou Ndao and Alioune Badara Bèye.

In recent years, the female writers who have contributed to Senegalese literature are Mariama Bâ, Fatou Diome, Ndeye Fatou Kane, Aminata Sow Fall, Fatou Sow. In their literary works, they address the issues of polygamy and feminism.

Mass media in Senegal are varied and include multiple television channels, private radio stations, and over fifteen newspapers.

The most important newspapers are limited to Dakar and Thies and they are written in French or Arabic. The daily newspapers are Le Soleil, Sud Quotidien, WalFadjiri, Le Quotidien, Le Matin, Le Populaire, Il Est Midi.

Music and dance are very important in Senegalese culture, markets, roads or houses. Any place or moment is a great opportunity to make music. It can be a form of entertainment or a medium to communicate social claims. Traditional Senegalese music is polyphonic and very rhythmic. Percussion instruments are the ones that are predominantly used in compositions, in addition to some traditional string and woodwind instruments.

31th July: Eid al-Adha is referred to as “Tabaski Festival” in Senegal, commemorating the”Sacrifice Feast”, the willingness of Ibrahim (Abraham) to sacrifice his son.

29th August: Ashura, commemorating the death of the grandson of Muhammad

5th October: Magal de Touba, is a pilgrimage to the city of Touba. The event commemorates the exile of the Sufi religious leader Ahmadou Bamba from Senegal to Gabon.

The official Senegalese Education System is based on its French counterpart. The Senegalese constitution added two new articles in January 2001 (art.21 and 22) which grant all children the right and access to public education. However, the limited resources and the low demand have made Islamic education more prevalent in many areas. For demographic reasons, multi-grade teaching is especially diffused in the sub-Saharan territory and the outcomes of this kind of education are poor, with less than half of the students passing the school year.

These schools, public or registered private middle schools, are concentrated in  urban areas of Dakar, Thiès and Zinguinchor.

Senegalese secondary education has two different paths: a general one  (adhering to the French “llycée” standard) and a technical one (where students receive more practical skills). These secondary study programs last three years and are officially approved by the French baccalaureate.  The technical secondary education program culminates in the passing of the BEP (brevet d’études professionnelles) and of the BT (brevet de technicien).

TVET programmes are offered at the secondary level and are taught at technical high schools (lycée technique) and in vocational education and training centres.

TVET system is organized as follows:

TVET at high education level: TVET is taught at the undergraduate and postgraduate levels. The most important institutions for higher education and technical and vocational training are the High School of Technical and Vocational Education (l’Ecole Normale Supérieure d’Enseignement Technique et Professionnel) and the Higher Polytechnic School (l’Ecole Supérieur Polytechnique) of Dakar.

Unfortunately, Senegalese universities do not have a good international reputation.