Regions: Italy, Switzerland, Republic of San Marino, Vatican City, the Republic of Malta. Italian is also recognized as a minority language in Slovenia and Croatia.

Throughout Italy, regional variations of Standard Italian, called Regional Italian, are spoken. Regional differences can be recognized by various factors: the openness of vowels, the length of the consonants, and influence of the local language. 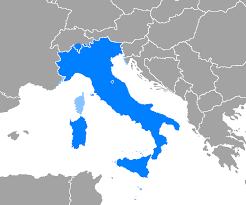 Italian is a Romance language derived from Latin. Is the official language of the Italian Nation. The dialects are very Important for the Italian People and, usually, they are used in the common question and discussion. The Italian language became from the dialect of the tuscanian region, and before the born of the nation it was also spoken in Italy like to national languages.

The first written attestation of the earlier Italian form (volgare) is a series of documents known as “Placito di Capua” or “Placito cassinese”: some notarial acts, written between 960-963 A.D. about the ownership of some lands, belonging to the monastery of Montecassino. In Italy, the literates spoke Latin while the majority of the people communicated with a local vernacular, which explains why it is extremely difficult to find written documents in “vulgar language”. At the beginning of the XIII century, some poets gathered around the court of Frederick II in Sicily and started composing courtly love poems in Sicilian. The “Sicilian School” was the first attempt to use “Italian” (or an early form of what was later called Italian) as a literary language. As explained by Dante in his “De Vulgari Eloquentiae”, an essay that defended and promoted the use of Italian Vulgar as a literary language – the spoken language in Italy at that time (1303-1305) had assumed different local forms and none of them could be used as a poetic literary language. In order to create an eloquent and understandable language, it was necessary to choose among the vernacular forms the least local and the most “eloquent” words. It is important to remember that in that century, Italy was not a unified nation. In the Modern Period, from Mediaval ages at the unity of nation in 1861, Italy was a chaotic territory, consisting of independent and semi-dependent states. Some cities, such as Florence and Venice, were powerful and influential republics. Italy was divided from within as well as being politically and culturally linked to realms outside of what we think of as Italy.”[1]Another interesting thing to note is that in 1861 only a minute portion of the population was able to speak Italian; a mere 2,5% of the inhabitants.

Italian, as previously mentioned, is the official language in Italy and San Marino. It is the administrative language for the Vatican City and it is an official language in Istria County in Slovenia, in Croatia, in Switzerland and in Malta. Nevertheless, Italian is also spoken in other regions of the world for different reasons:

-For historical or economic reasons: annexation or loss of some territories such as Corsica, Istria, Dalmatia or because of close trade relationship.

– The phenomenon of migration of the Italian population: There have been two significant emigrations from Italy: the first one dates back to the end of the XIX century, after the unification of Italy, from 1880 till 1920, and a second wave of emigration during the rise of fascism in Italy (1940). The quest for a better life and the escape from poverty had been the main reasons for leaving the country. The people were mainly from the Southern Italy but also from Northern regions such as Veneto (where people died of pellagra, an illness caused by lack of vitamins from food shortage), were confronted with harsh living conditions.The most desirable destinations were: France, Germany, Switzerland in Europe; The United States and Canada overseas, and Brazil, Argentina in South America. In recent times, Australia and New Zealand have become attractive destinations.

The study of Italian as a foreign language: Italian is one of the five most studied tongues in the world. People choose to learn Italian particularly for cultural reasons: Historically, Italy is famous globally for music (Opera), gastronomy and enology, art, architecture and fashion.

The official status of Italian

All the geographic regions of the Italian Country have a typical dialect. It is possible to divide them in tree geographic macro-areal: Northern dialects, (Lombardo, Veneto, Ligure, Piemontese); Central dialects (Toscano, Emiliano, Umbro-Marchigiano, Romano, Abbruzzese) Southern dialects (Campano, Cilentano-Lucano, Pugliese, Calabrese, Sicialiano) the Sardinia has a tipical Language: the Sardo.

The basic word order of Italian is SVO (Subject-Verb-Object) and being an inflected language, it has a complex morphology. Italian grammar contains these lexical categories: articles, nouns, pronouns, adjectives, prepositions, verbs, adverbs, conjunctions and interjections.

The Italian alphabet has 5 vowels and 16 consonants

The Italian cardinal numbers are invariable adjectives except for “one”: in Italian  “uno” has the feminine form “una” and one thousand: “mille” which has the plural  as a suffix: “-mila” for example “tredicimila” means thirteen thousand. The Italian number system is a decimal system. After ten, the numbers are formed by adding  the number from zero to ten and after twenty (venti) the number is made by  removing the last vowel, for example 21 is formed by “venti” (twenty) plus “uno”  (one) and the result is “ventuno” and the last vowel of the number twenty has  been removed.

Italian is an inflected language. The unmarked way to make an Italian sentence is to put the subject first, then the verb followed by the object. In fact, Italian has an SVO (subject, verb, object) sentence structure. All the Italian nouns have two genders, masculine and feminine, and the inflection mark will repeatedly convey the gender and the number (singular or plural) of the topic in same phrase. By the verbs, we can deduce the subject pronoun, so it is not always necessary to express the pronoun. In Italian, the nouns, the articles and the adjectives have to agree together in gender and number. The indirect object usually occurs after the direct object. Furthermore, the adjectives can occur before or after the noun they are describing, but sometimes the position changes the meaning of the adjective.

In Italian, every noun has number (singular or plural) and gender (feminine or masculine) and this categorisation is even for abstract nouns or objects. Articles and adjectives have to agree in gender and number with the noun and also the articled prepositions that are made putting together, articles with simple prepositions as we will see afterwards.

Italian nouns can also be modified by adding a suffix at the end of the name, thereby changing the meaning of the word.

Subject pronouns are inflected for person, number, case and also gender for third person: Lui, Lei (He, She). Subject pronouns are normally omitted in Italian, because the morphology of the verb easily allows speakers to determine the grammatical subject. Consequently, if we use the personal pronoun in Italian, it is to emphasize the role of the subject, for example in the phrase “Pago io” (I will pay) declared at the end of a meal, it will indicate that the person wants to offer the meal to the other guests in addition to paying his/her part.

Italian verbs have a complex morphology; the conjugation is affected by mood, tense, aspect, person, number and in some occasion also gender, for example the third person has the feminine and the masculine form: “lei”, “lui” (She, He).

The regular verbs are subdivided in three classes that we can distinguish by the end of the verb at the infinitive forms in :

1st conjugation: -are like “cantare” (to sing) or “ballare” (to dance)

Italian has also a great number of irregular verbs, especially for the present tense and the absolute past, but their irregularities are more or less predictable, some of them follow, in fact, various degrees of regularity within the paradigm.

Italian conjugation shows, in many tenses, compound verbs made with the auxiliary verbs “essere” (to be) and “avere” (to have). Italian has also modal verbs like “dovere”, “potere”, “volere”, “sapere” that can be used in combination with other verbs for example. The mood is an important part of the Italian conjugation system: we should divide the verbs in two categories the verbs with finite mood and the infinite mood.

The finite mood always presents person and number and it’s normally indicating who is making the action.

We have four finite moods in Italian:

1.“Indicativo” (Indicative) that express the event in the reality.

Italian verb can have active or passive form. The passive form is used to reverse the subject and the object of an action and could be useful to focus on on the subject who is carrying out the verb and to clarify agency or responsibility, but can be used also to move away the attention from the agent, for example: “Il famoso dipinto è stato rubato”, “The famous painting has been stolen”. So when can use when we don’t exactly know who is the doer of the action.

The Italian adverbs can be simple (only one word like: “poco”, “sempre”, “qui”, “mai” etc.), composed like “almeno”, “Dappertutto” and derived from adjectives or nouns with the addition of the suffix “-mente” like.

Italian has proper prepositions: simple (di, a, da, in, con, per, su, tra, fra) and combined with the definite article. Only the prepositions “di”, “a”, “da”, “in”, “su” are used to make articled preposition, following the scheme below:

The coordinanting conjuctions tied together propositions that has the same nature, and the same importants, two or more indipendents phrases.

[1]  <<Dante and the Invention of the Italian Language >>, Micheal Curtotti in Beyond Foreignness, on-line revue, October 8, 2018,  https://beyondforeignness.org/5781