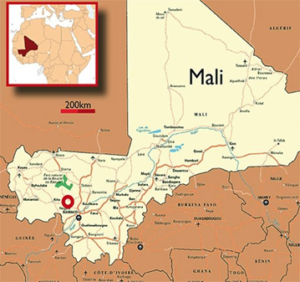 The Malian climate is different. From the sub-tropical humid climate in the South to dry climate in the North, but it is mainly dry, with 4-5 months of rainy season a year.

The hot wind called “Harmattan“ makes the dry season in the North of the desert especially in December.

The average temperature can rise over 38 degrees in April and are 33 degrees in January, the coldest month.

In Bamako, which is the capital situated 340 metres on the sea level, temperatures change from 16 degrees to 39 degrees.

Among them 274.000 exposed to the most insidious form, serious acute malnutrition, if is not promptly treated, it may be fatal.

This represents an increase of 34% of malnourished children mainly due to he food crisis in some regions of the country.

While the lack of interest of the international community doesn’t allow to the charity organization to buy useful therapeutic food to heal malnourished children. Mali has the highest infant mortality rate among ten countries in the world: an infant on 28 dies within a month of birth. Maternal mortality is also very high.

History: The history of Mali started from the Empire of Ghana which extended itself till on the borders of current Mali and Mauritania in IV and XI century

The Golden Age of its empire started when camels could carry salt, gold and ivory to the Middle East, North Africa and Europe.

But the Empire Songhai of current Nigeria outdid them at the end of XV century. Songhai empire was defeated by Moroccan army in 1590 and the area of Mali was divided into several smaller countries. From 1895 Mali joined of French West Africa. Mali was a French colony in the West of Africa. Its name was French Sudan. After the independence it was called Mali.

In 1960 Sudanese Republic and Senegal obtained their independence. Some months later Senegal got separated and Sudanese Republic became Mali. Mali is one of the least developed economically Western Africa countries. Its geographic position away from the coast and too hot climate determines frequent famines.

Geography: Mali is a Western Africa country situated on the South West of Algeria in Sahara Southern Regions.

It covers an area of 1.241.238 km2. It’s larger than Italy four times. Its borders are: Algeria in the North and North East, Niger in the East, Burkina Faso in the South East, Ivory Coast in the South, Guinea in the South West, Senegal and Mauritania in the West.

French colony until 1960, Mali is a semi-presidential Republic. In 1992, thanks to a popular referendum, constitution was passed in Mali. Nowaday the President of Republic is elected by direct suffrage and he remains in charge for five years. The National Assembly carries out the legislative. It is elected every five years. The judicial system is based on the French law and local habits.

Justice is administered by High Court situated in Bamako and it is divided into two branches:

There are the Law Court and two Courts of 1st Instance

The Judge of Peace is an important figure but he judges civil trials only.

In Mali there is the Death penality but the last execution is happened in 1980.Military are divided in three traditional forces.There is a Navy too and it works on the river Niger. Military service lasts two years.

Mali is one of the poorest country in Africa and in the world. It has got a high illiteracy race. It has not rich in natural resources, mainly constituted of desert territory and with frequent natural disasters, above all in 70’s -80’s. The river Niger is very important for the country because it is the most important water source and transport route and for the trade.

Agriculture gets job to 80% of people and it is influenced by climate and the flooding of the river Niger. In Mali millet, rice, sorghum, corn, yam, and cassava are produced. All products are seeded, watered and picked up by women. Women crush seeds with traditional big wood pestle. Other crops are. peanuts, sugar cane, tea, tobacco, and cotton. All these crops are earmarked to foreign trade. Pays Dogon area is important for the production of onions, small and sweet, famous for their taste. 10%people breed flocks along the Sahel area. Mali and Nigeria are the most important producers of sheep meat in Africa. Along the river Niger is spread horticulture and fishing (the perch).

Industries are mainly in the Bamako area and they are: the chemical industry, the textile industry, the diamond industry and cement. In Sadiola,in the Kayes area there are mines of gold.

The literary tradition was transmitted orally by the “JALIS” or sing stories who act or sing stories learn by heart. The most famous Malian historian Amadou Kampatè Ba has written these oral stories handed down. The most important novel is “Le devoir de violence“ by Yambo Ouologuem. This novel won the Renaudot del Prize in 1968. Other authors are: Baba Traore, Modibo Sounkalo Keita, Massa Makan Diabate, Moussa Konatè, Fili Dabo Sissoko.

Malian musical traditions derived by Griots. Griots or Diali are street singer who talk about deeds of Malian heroes through three great historical Empires. Both the oral history of Mali and the art to create music are still alive thanks them. In Mali there are Griot’s families who get handed on the job from father to son. The greatest Malian artists were born in a griot’s family except for Calì Farkatourè. In Mali music accompanies official ceremonies both everyday life and job.

Radio is the main means of communication. In Mali there are twenty-five radio stations. Foreign programms are available by local media or satellite expecially in Bomako. In 2003 there were forty-two private newspapers and magazines (thirty-nine in Bamako, one in Tombouctou, one in Mopti and one in Sikasso) published in French and Arabic languages and in other national languages.

24th May – the Muslim Festivity

Secular Holiday. on 25 th May 1963 the Organization of African Unity was born in Addis Abeba in Ethiopia. The purpose was to create unity and solidarity among the African countries in order to defend sovereignty of all members, root out all the forms of colonialism, promote international cooperation, in respect of the United Nations Charter and Universal Declaration of Human Rights, coordinate and harmonize economy, diplomacy, education, health, welfare, science and defence the politic of member states.

Grand Bairam (may vary of one day)

31st July Muslim (it is the second most important Muslim celebration. It celebrates Abraham’s will to sacrifice his son to obey God. Each year Muslims undertake their pilgrimage, called “hajj” to Makkan in Saudi Arabia. These holidays are paied on Saturday or Sunday)

The Muslim anniversaries follow lunar calendar and their dates vary each year.

Ramadan takes place during the ninth month of muslim calendar, a period in which changes in according to the lunar one.

During all month, each Muslim observes abstinence from food and water, sexual abstinence and thought’s purity from sunrise to sunset.

The purpose is to purge soul from material corruption. The end of Ramadan varies each-year when the new moon appears and it is celebrated with a festivity called Aid el-Fitr. During this feast, people feast from morning to evening and pray. Sigui is an Animist religious feast. It is celebrated every 60 years on the Falaise near three villages of Youga. They are initiation and expiation rites celebrated dancing and wearing masks. This feast honours Dogon people’s deeds Among tha masks there is the “Imiana” mask which represents a prostrated snake. After the feast this mask is put in a sacred place inside a cave to be used again after sixty years. In Mali people organize a lot of festivals linked to music , traditions and art. Among them there are:

the Desert Festival (Festival au Desert wwwfestival-au-desert.org) which takes place in the first part of January and it is the most important musical event in Western Africa and the 24th most important international festival.

It was born in 2001 among the dunes of Essakane far 65 km from Timbukty, with the purpose to spread Tuareg culture and the peace in the desert.

It is a very important event because it collects all Mali’s musical traditions and it is opened to international exponents too, as it spreads peaceful principles, brotherhood and tolerance among people and respect for different cultures.

The Festival Sur le Niger (www.festivalsegou.org) is an interesting cultural kermesse hosting the most important Malian musician. It is in February, on the pier of Segou on the banks of the river Niger.During this feast, for four days, the city is full of stalls, craft exhibitions, puppet shows, traditional dances, conferences and round tables. Since 2007 and every year the International Festival des Cauris takes place between the end of November and the beginning of December, in the town of Siby far 45 km from Bamako on the mountains of Manding. It is dedicated to the Mande’s traditions and culture and it is inspired by Cauri, small white shells which, in the past, were used as coins, decorations or amulets. This festival lasts three days and there are hunters’ performances, fashion shows, art exhibitions, craft, traditional dances and music. Many excursions furthermore take place in the wonderful nature of Pays Manding and people can visit the ” Maison del karitè”, where the shea butter is producted. “Recontres Africaines de la photographie” in Bamako is the most important international event for African contemporary photographic art, which takes place every two years in October or November. The event, born in 1994, lasts one month. During this festival there are exhibitions, photographic competitions and courses, meetings and workshops with the artists.

Other important events of contemporary art in Africa are:

Fespaco, it is the cinema festival in Burkina Faso

The Biennal Exhibition of Contemporary Art of Dakar in Senegal

The first Malian directors were: Issa Falaba Traorè, Souleymane Cissè, Djibril Kouyatè, Kalifa Dienta. They formed themselves in the Eastern European countries and at the VGIK in Moscow except for Abdoulaye Ascofarè who started his career as director with the film “Une mère de sable”in 1997.

In the 70’s-80’s strog political and social subjects film were created.

Fakoye (the lamb meat with a herb sauce )

The riz au gras (rice mixed with vegetables and fat)

The school system is organized in:

The Secondary school: it lasts six years. It is divided into two cycles, each cycle lasts three years.

The enrollment rate is very low because of families ‘poor conditions and the cost of uniforms, books and school taxes is high.

The Public Education suffers from the lack of schools in rural areas as well as the educational materials and qualified teachers.

Primary school ‘s children better learn using their mother tongue, but all the books and educational material are written in French language, so knowledge is harder for them. Not for a long time the Malian teachers are teaching in different African dialects (our Africa.org). The literacy rate is from 27-30% to 46,4%. Women’s index is lower because they are compelled to help their families in housework, so they cannot attend the school.

The secondary school is divided in :